If anyone mentions Calais at the moment, everyone thinks of immigrants! But you’d be wrong today as DailyNord is going to take a look at the town hall, and more precisely, its audacious and ingenious architect, Louis Debrouwer (1879-1867), from… Dunkirk. This is the second episode in our Architects summer series. 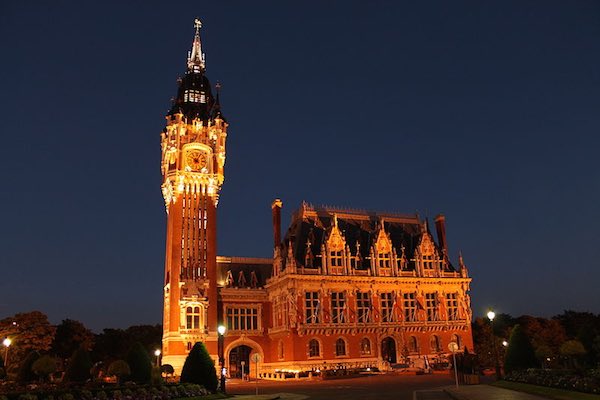 And what have we chosen as an illustration? Calais town hall of course!

The construction of Calais town hall was by no means reserved for Louis Debrouwer. Ninety-five projects were proposed in 1888 as contenders for the construction of the Calais town hall. At that time, the principal town had just merged with Saint-Pierre and so it only seemed right that the chosen site should be located between the two old town halls, on the « Plain of the Sahara », so named due to the sand that covered the area.

The people of Calais craved for a pioneering building, preferably with a belfry. After many twists and turns… Louis Debrouwer from Dunkirk was chosen for his technical prowess! Thanks to his revolutionary choice of reinforced concrete instead of cut stone – an invention by the Nordist François Hennebique, see the Northerners’ Deviant Pocket Dictionary – Pas-de-Calais, he proposed a town hall with lower construction costs and big enough savings to be able to splash out on a Neo-Renaissance and Flemish style interior design. The reinforced concrete construction also meant less load on the sandy soil bedrock.

Building started in 1912 under the watchful eye of Emile Salembier, then mayor of Calais. Of course, the First World War put the brakes on the construction site which only restarted in 1919. The 72-metre belfry, with its 175 steps, is composed of hollow red bricks from Courtrai and white limestone rock. The architect constructed a lateral rather than central great staircase.

Finished in 1923, the building was inaugurated on 12 April 1925 by General Alvin, representing the War Ministry. Louis Debrouwer is also known in Calais for having designed the Postal Centre, the abattoirs (now « The Channel » cultural centre) or even Sophie-Berthelot College (today a secondary school)