On this fine, sunny Sunday or not as the case may be (yes, you’ve guessed right that this article has been published automatically while we’re relaxing at the weekend), DailyNord invites you to Calais, direction Folkestone, that’s in England yep, via the Channel Tunnel. 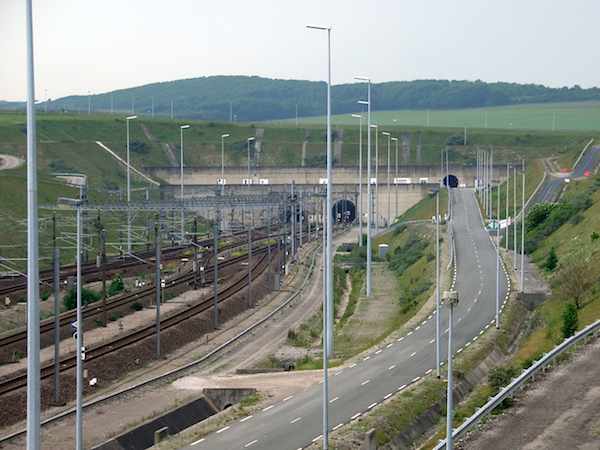 The Channel Tunnel linking Calais, or rather Coquelles, to Folkestone is the only one of its kind; it even figures as one of the Seven Wonders of the Modern World along with the Panama Canal, the Empire State Building (New York) or the Golden Gate Bridge (San Francisco). Interesting detail: although called the Channel Tunnel, it actually goes underneath the North Sea.

Plans proposed over the centuries

Even though the Channel Tunnel is only 20 years old, the idea itself dates back several centuries being first thought up in the eighteenth century! The first designs were created in 1875, but passing over the surface, the British judging that digging a tunnel to the Continent presented too big a military risk. In 1973, the idea was aired again, but this time the cost was considered prohibitive. During all this time, many projects were put forward including some for bridges.

In 1984, Mitterand and Thatcher signed an agreement to build a permanent tunnel link. Work began in 1987 and on 6th May 1994, Great Britain officially ceased to be an island. The train shuttle links her to the continent in 35 minutes, while would-be immigrants wait patiently for months on end in makeshift shelters.

Well, there must be some drawbacks to the tunnel. Eurotunnel, who has the concession to exploit the infrastructure, did not make a profit until thirteen years after its opening. And today the objective of creating closer links between the local inhabitants of the two coastal regions has not been achieved. The Channel Tunnel has mainly benefited Paris, Lille and London. So the old idea that refuses to die of a cross channel underground line has come up again. If it takes as long to become reality as the first link between France and Great Britain…….

Translated by Loveday Pollard and proofread by SafeTex