In the middle of the Paris International Agricultural Show, DailyNord has entered a new word into our proud Northern dictionary: Filouse. 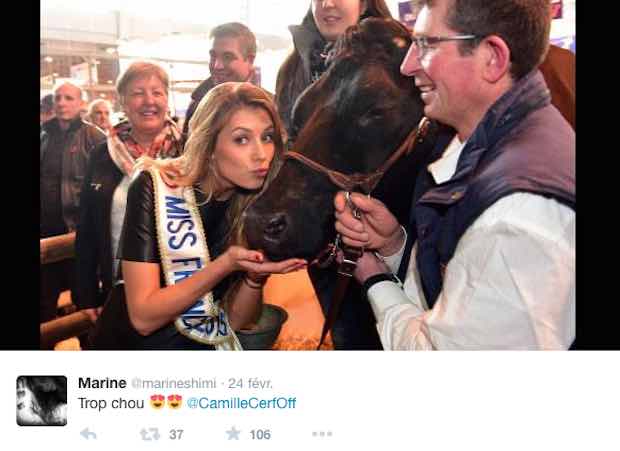 Can you see her?
Screen shot of Miss France’s Twitter page.

Not exactly a companion animal. Also slang for racy, impish, naughty (in a positive sense) and often used in the feminine*.

India has its sacred cows, and now the North has its own cow craze. Filouse was unheard of outside the farm in Wemaers-Cappel where she was milked for the benefit of mankind until she was chosen as the mascot of the Agricultural Show. You’ll find her on posters, marketing material and even in the Paris metro to remind Parisians once a year that milk is not produced by tetra briks and vegetables do not grow in tins.

Five years old and in her second lactation as the experts say, 1.42 metres tall at the shoulder, almost 750 kilos in weight, a well-formed black head on a chestnut coat, Filouse has been chosen as she belongs to the breed of cow given the place of honour in this year’s show: the Belgian Red. More than a million of her ancestors were to be seen grazing in the 19th century but only two thousand are left today if you must know.

A celebrity among celebrities.

Many famous two-legged animals have been prostrating themselves before Filouse this week. Let us mention, among their ranks, François Hollande and Manuel Valls and of course our own regional pride and joy, Miss France 2015, Camille Cerf*. We’ll resist the temptation to end this article with another second-rate pun.