On this Christmas Eve, we could have compiled a dictionary on Father Christmas but he’s out of luck; he isn’t a local. So we chose to take an interest in the Lille-Flanders Railway Station instead, which isn’t quite as local as you might think either. 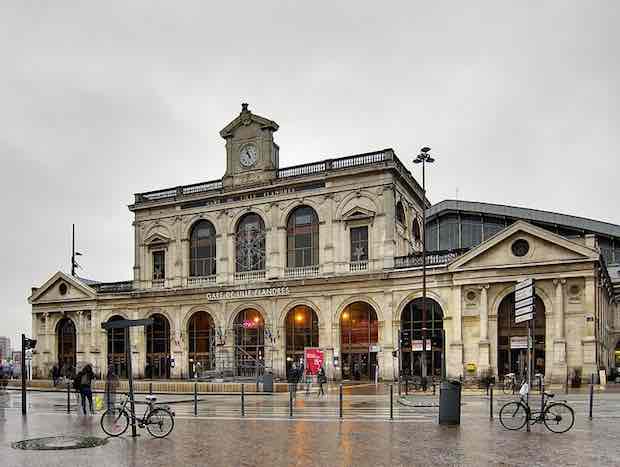 Like a Paris to Lille one-way. Photo: Velvet on Commons Wikimedias.

A place of meetings, departures, reunions, hugs, rows, stress: a railway station in other words.

Inaugurated in the second half of the 20th century when railways were invading France and Western Europe*, the Lille-Flanders Railway Station, built on the old Buisses Barracks (from which the name of the small square nearby), conceals an unimaginable fact from even the most observant eye: the stones of the main façade (with the exception of the topmost part and the clock) come from… the old “Gare du Nord” Railway Station in Paris. Yes Sir, the Paris station was too small and after barely two decades of loyal service, it was decided to build a larger one. And like all crafty and thrifty Northerners, the people of Lille recuperated the stones just as they were later to recuperate several Parisian politicians.**

At that time, it was simply called “Lille Railway Station”, as there was only one and no room for confusion. “Flanders” was added while “Lille-Europe” Railway Station (for high-speed/TGV trains) was under construction. But even in the presence of a second modern station not even 500 metres away, Lille-Flanders is still the star. It’s the most frequented station in the region and the second most frequented provincial station in France: 21 million travellers criss-cross it every year. Which means it merits regular modernisation, like the latest one presently under way for a mere 18 million Euros, enabling it “to step into the 21 century” as they say.

* The construction took place over many years, starting with a simple “debarcation point” in lieu of a station in 1848, its extension and utilisation of the Paris façade between 1867 and 1869, followed by interior refurbishment soon afterwards.