Chip stalls: Their chips are down?

Chip stalls: Their chips are down? At Bailleul, the subject of relocating the chip stall which has been in the same spot for decades on the main square was a political powder keg last May. Yet, many a town is slowly but surely pushing out our beloved chip stalls. So who has got in it for your common chip stall, symbol of the Nord? 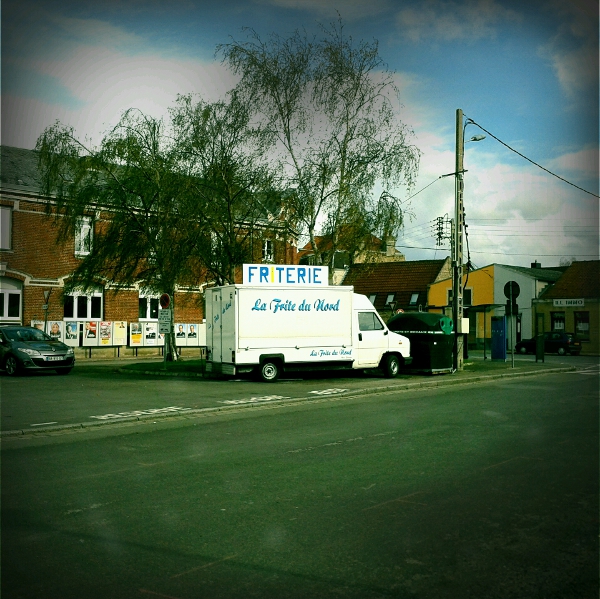 Someone has a chip on their shoulder! A little recap: a few weeks ago, the new Mayor of Bailleul, Marc Deneuche, let the cat out of the bag to a potential buyer of one of the two chip stalls up for sale in the Grand-Place: He wouldn’t bet too much on the future of these stalls in the town’s main square. In a letter reproduced in La Voix du Nord, he wrote: « If I won’t go as far as to contest the sale of this business, I can’t say that I’m for the continued presence of these stalls in Bailleul’s Grand-Place. » Arguments about heritage and how to show the square off in the best possible light were also evoked. A real blow for the seller… even if the Mayor assures that nothing is decided yet. ‘Cos who is going to fork out for the stall in question, which has become a landmark in Bailleul (ask any oldie in Lille if they stopped off at Bailleul on their way to the sea when….)? After the Mayor stuck his oar in, the sellers had to put an advert in the local paper: Chip Stall, 22,500 Euros, negotiable.

Don’t call ’em small fry. Certainly not our chip stalls who sell freshly made chips fried in beef suet, even if the dressing can be a bit kitsch sometimes. These 1970s customised caravans are symbolic of the region as seen in the French film Bienvenue chez les Ch’its (Welcome to the Sticks*) where a real one by the name of « Chez Momo«  (At Momo’s) was used for filming. Are they today condemned to disappear?

The chips are down in Lille!

It has to be said that there are no longer any « real » chip stalls in Lille. With perhaps one exception at the Citadel, where the Lille chip stall could be described as the last of the Mohicans. And for good reason. These street traders need a permit from the town hall to set up ‘stall’ in public spaces. At Lille, it’s laid down in the  local bye-law which replaced that of 1995. So today there are just a handful of chip stalls (five!) in the Flanders’ capital, which always surprises the tourists, forced to leave the town centre on their quest for their cliché French photo…

In other towns too, local bye-laws limit the maximum number of chip stalls. Or permits are sometimes handed out case by case with a multitude of conditions thrown in, starting with the one that says there is a hefty permit fee to pay or that you have to clean up the surrounding area where your stall is parked, as stipulated here in a permit granted by Oignies town hall last February.

Even on private property, it’s not in the bag

Without forgetting that a permit for a mobile caravan cum stall is at the town hall’s discretion. In Flêtre, a little village in Flanders, a chippy was refused a permit to set up next to the church after the town centre had been redeveloped, L’Indicateur des Flandres reports. At Tilloy-les-Mofflaines, near Cambrai, the mayor opposed the establishment of a chip stall in the Actipôle business park in 2011, La Voix du Nord  informs us. Some chippies get around the rules by parking on private property. But even then you need to have the right pitch… and be on good terms with the neighbours. In the Pas-de-Calais, we met up with a chippy who had just closed down in spite of staking out his claim on private land: « The neighbour didn’t like the smell. He made my life a misery. I had to give up in the end. » He should have tried his luck at Evin-Malmaison, in the Pas-de-Calais, near Hénin-Beaumont. The mayor welcomed a chip stall with open arms there last December. « Northern chips are a speciality worth protecting », he writes in black on white in an article that appeared on the town’s Internet site. Or perhaps at Lens, where a football ground without chip stands would be heresy: the Lens F.C. supporters can gobble down up to two tonnes of chips per match at the 25 chip stalls on a big match night.

So here and there, even if there are a few oases of chip stalls, more and more towns are getting rid of them. These street traders that fed the workers at the factory gates are now under pressure to run their business out of normal premises. Or even to sling their hook. More and more regions would like them to settle down into a normal shop; in other words to conform to a more standard retail business model. Some towns refuse outright a permit to any chip stall within certain town limits. Such is the case at Boulogne-sur-Mer, La Semaine du Boulonnais  explains, where there were no less than fifteen chip stalls on the Gambetta quayside in the 80s. Until the traditional shops put pressure on the council to limit them to five that is.

The justification for open season on chip stalls? Firstly, hygiene and the rubbish found around the chip stalls, the smell of frying oil or even food hygiene standards. Next, there is the argument about safety, as most chip stalls use cooking gas in tanks. More recently, the concept of « living environment » has been wielded! A good old chip stall decorated like the inside of a kitchen can be a real eye-sore on a nice little postcard of the town square. And cars parked all over the place are not welcome either.

The unstoppable march of standardisation?

Another evil is slowly spreading its way into our chip stalls: standardisation. You’ll find more and more of them have the same sauces sold by the same manufacturer, the same blue sea-lion on the paper around the plastic container, the same little plastic forks. Worse still, you sometimes find an all-too familiar taste of frozen chips, industrialised and standardised every last one of them right down to the size. Even the containers look alike. Not surprising as they are manufactured by specialised companies like Hedimag at Hazebrouck.

Our on the road stalls, those that still have the freedom to change spot to sell their wares at the side of the road, at a village fête or family do, are particularly in danger. In competition with Food Trucks (their American counterparts who haven’t invented anything new at the end of the day), kicked out of town centres by some town halls and detested by shop retailers or residents who see them as nothing but a nuisance, their life is not easy If we can’t put an exact number on the chip stalls in the region and the speed of their disappearance, certain estimations reckon there are some 300 left today as compared to 8,000 in the 1970s.

To try to save our precious chip, enthusiasts have already created « The Friends of the Chip Association » and even an « International Chip Institution« . Both organisations arrange events and conferences to raise the status of the fried potato to a philosophical way of life. « The imposed exile of these establishments is all part of the current trend of aseptisation and depersonalisation of our society », the Institution informs us. « This logic of standardisation and regression towards the lowest common denominator that makes ever-increasing demands on mobile food regulations and which forces more and more chippies to establish themselves in a more classical form of food kitchen. »

Do we need another association type « Protect the Chippie »? How to get the working class bag of chips recognised as a national heritage? Perhaps a new culinary category needs to be devised, a bit like UNESCO’s intangible cultural heritage. And where would the North be without our Northern chip vans?

Updated 19 June: Coincidence; the same morning that we published our article, we learnt of a fire at… the second chip stall in Bailleul’s main square. Completely destroyed in the flames.  An inquiry has been opened, which you can read about here (in French)

*The film was also called « Welcome to the Land of Shtis » at the box-office.

This article was translated by SafeTex and proofread by LCL Pollard