How bike-friendly is the Lille agglomeration?

Organised in May, the European Bicycle Challenge aims to encourage and develop the use of bikes and two-wheeled transport in the Lille metropolis. A praiseworthy initiative. But are our roads really suitable for amateur cyclists? Two of our young journalists, not really familiar with cycling around town, have tried out a few cycle routes (well, that kept them busy and out of mischief). So here are some of their answers (along with some useful info). 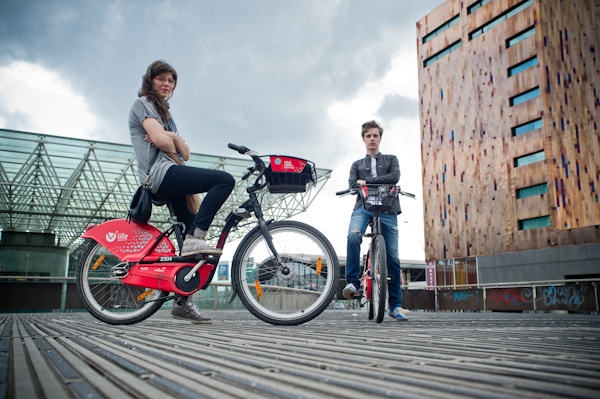 A first legitimate question: is it easy to find a V’Lille bike stand in the streets of Lille? Good news, on the routes tested (which went through Lille, La Madeleine, Roubaix, Lomme, Lambersart and Villeneuve-d’Ascq); there was never a wait to obtain a hire bike or to return it to the next V’Lille stand. That’s to be expected, confirms Sébastien Torro-Tokodi, spokesman for ADAV (Rights for Bikes Association), interviewed after the test: “Bike rotations are managed by Transpole and the system is quite effective. Vans are used to bring bikes where needed and vice versa”.

But can you find bikes just as easily in all the towns around the Lille area? Not really. Where Roubaix boasts 32 bike stands, Lomme and Lambersart put together only have about 10, which are not well positioned. They are mainly found near the metro line and on the main roads going into Lille. For those who live further out, it would be better to opt for a bike on a long lease. Same goes for bike stands in Saint-André and Ronchin. As for Loos, which is not far from the centre of Lille, there is not one V’Lille bike stand.

How about ease of use? No hassle: bikes can be hired on the internet or directly at stands equipped with a card-reader. The system works well: a debit card, a few clicks, a quick re-adjustment of the saddle, foot on the pedal and you’re off! At first the machine seems heavy and a bit difficult to handle. But once you’re under way, you quickly get used to it.

What about safety issues?

How safe is it to cycle around town? Depends on where exactly. Where there’s no bike path or lane, the novice can soon feel ill at ease. Some places are clearly dangerous: rue Faidherbe in Lille has such wide pavements that motorists tend to swerve a bit to make room for themselves, without paying much attention to cyclists. Then there’s the main road, rue Général de Gaulle in la Madeleine, with its heavy traffic: where there’s no bike or bus lane, best be on your guard!

Well then, what about the road-layout for bikes? This can sometimes be disconcerting. For example: on the boulevard de la Liberté in Lille, the bike lane is not clearly delimited within the bus lane. The cyclist has to rely on his own judgment. The same is unfortunately true throughout the agglomeration, but there’s “no need to be anxious”, affirms Sébastien Torro-Tokodi, “a campaign to raise awareness amongst bus drivers has paid off; drivers are more careful, less in a hurry and more patient (with regard to cyclists)”. Reassuring to know when you ‘re cycling in a bus lane.

Fortunately, it’s possible all the same to enjoy cycling along certain routes. Overall, the completely separate bike path, aka the cyclist’s paradise, is a rare find, as in the Haute-Borne district in Villeneuve-d’Ascq, or along the expressway to Lille coming from la Madeleine. We encountered no problems either on the avenue de Dunkerque, linking Lomme, Lambersart and Lille: the bike lane is wide and the traffic lights are close together. It’s easy to cycle in phase with traffic flow in spite of its high density. Watch out all the same for the absent-minded car-driver who opens the car door without checking first. “A word of advice” says Sébastien Torro-Tokodi, “cyclists tend to try to stay out of the way, to stick close to the pavement, but that’s just what you mustn’t do. Cyclists need to act confidently and take up all the space reserved for them; then they will be better respected by the car-drivers.”

How easy is it to navigate from A to B?

Bicycles have their own routes and one-way lanes. Not always easy to negotiate when you’re not familiar with the place. Plans are available in the V’LIlle information points and in the town halls, but this is not widely known. So it is fair to say that as a general rule, cyclists never know quite what to expect. You can go from a separate bike path to a lane on the road, then to a marked space or absolutely nothing… in some places there are signs and traffic-lights especially for bicyclists and elsewhere you’re left on your own. Somewhat confusing, to say the least.

On our test day, we took the boulevard de la Liberté to go from the Jean-Baptiste Lebas Park to Lille-Flandres railway station. Undoubtedly there is a shorter route, but the road signs for cyclists and the two-way cycle routes left our cycle guide somewhat perplexed. Same problem at the large junction between la Madeleine and Vieux-Lille: the cycle path is new and the road signs well in evidence, but perhaps a bit too much… There was so much information, with cycle traffic-lights, road signs and road markings in all directions, that it took a while to make head or tail of them and decide which way went to Lille. As for Roubaix, it’s easy to get lost. Although it has plenty of V’Lille cycle stands and a reputation as the town at the finish line of one of the most well-known cycle races (the annual Paris -Roubaix race), there is a singular lack of cycle paths or lanes on its main roads.

So does the fault lie with our young journalists? Definitely not. This problem of route-finding is being taken seriously by ADAV, who are currently working on including cycle routes in Transpole’s route calculator. More advice can be found on: OpenStreetMap, an online forum which collects comments on the cycle friendliness of French roads.

So is public opinion ready to accept cyclists?

Basically, on the street, the inexperienced cyclist doesn’t feel comfortable. The situation with buses may have improved, but it’s still far from easy with cars. Drivers rev up their engines impatiently behind you or sweep by too close for comfort. In short, you get the definite impression that you’re in the way. Then comes the final insult: where there are cycle lanes, car-drivers use them as drop-off zones, especially in front of stations or in shopping areas. What’s more all these acts of incivility have been repertoried for your entertainment on the blog: Lille au Blaireaux (a rough translation would be “Lille Road Hogs”)

When the cyclist finally has the right to his or her own cycle path, pedestrians use it as an extra bit of pavement. It’s a hard life being a cyclist…At present, there are not many bicycles in use in the Lille agglomeration, a factor which encourages other road-users to overlook the areas specifically designated for cyclists. As a result, cyclists feel intimidated and seek refuge on the pavements, where they put (yes,you’ve guessed it) pedestrians at risk. According to Sébastien Torro-Tokodi this is because there is “a lack of a cycle service network like the one existing for cars. We are working towards putting such a network in place. Not only would there be infrastructures, but also services similar to those for cars: repairs, sales point etc. and above all more information about cycles.”

What future developments are planned for cycle paths in the Lille agglomeration?

ADAV has pinpointed 50 black-spots in the agglomeration. According to Sébastien Torro-Tokodi, it would take between 50 and 80 million Euros to make them safe. One of these black-spots is the Porte des Postes roundabout, where the proposed construction of a raised passageway would cost 500,000 Euros. “Almost all of the junctions between the ring road and Lille town centre are problematic,” indicates the Association.

To be precise, the next developments will be the creation of new cycle lanes mainly, as in rue du Molinel and rue Javary in Lille. As for the V’Lille bikes, according to Sylvain Crampon, product manager of Transpole for V’Lille, there are currently 5,700 in the agglomeration, That is to say: “2,200 available on self-service and 3,500 on long leases. The 2,200 bikes can be found on 218 stands.” The initial goal was to reach 10,000 bicycles in 2014, with special emphasis on long leases. The original plan has been reviewed to increase the number of bike shelters by adding a further 28 to the 12 currently in existence and 2,000 extra individual bike hoops have been purchased to equip the streets. The Lille agglomeration, which can boast of 500 kms of dedicated bike routes (cycle-paths and lanes), aims for 10% cycle traffic as opposed to the 2% usage estimated in 2006.

In conclusion, the Lille agglomeration has effectively moved in the right direction, but it will still have to pedal hard to catch up with its illustrious neighbours such as Amsterdam. In the Dutch capital, the creation of suitable infrastructures for cycles has resulted in an increase of 44% in bicycle usage. Indeed, such is the bicycle’s popularity, with 880,000 bicycles for 800,000 inhabitants, that cyclists face their own traffic jams and parking problems. Further impressive statistics: the city boasts 10,000 cycle parking places near the station and 220,000 cycle hoops. Clearly, Lille is not even in their slipstream…