Isn’t she beautiful, my water tower (as seen from the inside this time)?

Water towers are like frankfurters. Everyone knows what they look like, but nobody knows what’s in them. So having given you an insight into their rich and varied architecture last week, now’s the time to take a peek inside two of them. First to try and understand how they work and then why they are so tall.

« People, especially children, imagine that the moment the door is opened, all the water will flood out! » Olivier Planckeel has a smile on his face as he recounts this anecdote, sure it will produce a laugh. Director of the Noréade Centre at La Gorgue, he knows pertinently well that few can be bothered to find out what really goes on in water towers. « Not many people know how they work. So we try to explain, particularly on World Water Days. »

Noréade (administrator of SIDEN-SIAN, Water Authority for 687 communities in the Nord, Pas-de-Calais, Aisne and the Somme) has kindly explained to us how they work… by letting us have a look inside two of their water-towers. Starting with the one at Nieppe. This is one water tower in the region which doesn’t go unnoticed, as it is seen by thousands of commuters driving along the Lille-Dunkirk motorway every day. It’s 45 metres high, looks like a giant tulip and bears the Noréade colours. It is, of course, equipped with a safety alarm restricting access (like all water-towers, it’s covered by the French anti-terrorist legislation « Vigipirate »). Inside, the first thing to hit you is the overwhelming noise of the machines which occupy the ground floor: the pumps, variators, electric panels, electronic equipment etc. In short, everything that’s needed to keep the whole thing turning. After that, there’s practically nothing except a steep upward climb on a spiral staircase, (so steep in fact, that the journalist lost his nerve half-way up, while the intrepid photographer continued on and it’s his description which follows). Once at the top of the staircase, there’s a platform sporting a few tubes and pipes that service the final sanctuary: the water reservoir. This penultimate destination can be reached by a very narrow ladder leading to the double water tank, which forms the highest circular part of the water tower visible from far and wide. There is a slight smell of chlorine. Last stop, the roof. A second narrow ladder goes up to the culminating point at 45 metres with a clear view over Flanders, Mont des Cats in the distance and a dizzy view straight down to the ground below. The ideal place for a photo shot, before coming back down to earth via the narrow ladder and that vertiginous, steep staircase…

Tall water-towers: a question of pressure and northern geography

A vertiginous climb which leads us to the existential question: why are water-towers so high?  The answer, Dear Sir, is the pressure: « The higher the water tower, the greater the water pressure and the further the distance from the town, the greater the pressure needed », continues Olivier Planckeel. « In a hilly area, you can reduce the height by placing the water tower on top of a hill and still obtain the necessary pressure. In mountainous areas, there are very few water-towers. » Here at Nieppe, since the early 1970s, 1,300 cubic metres, renewed daily, have supplied Erquinghem-Lys and Nieppe through a network of 110 kms of pipelines. More recently, the water tower has found a second use: several operators pay a yearly rent to install transmitters on it.

Next stop Bailleul, with firemen in residence 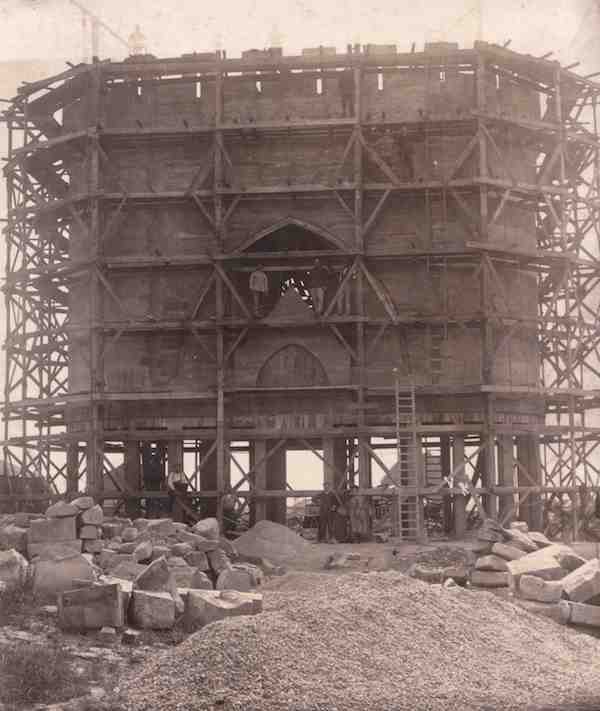 Flashback: The water tower at Bailleul under construction. Our thanks to B. Flahault, member of the Cercle d’histoire et d’archéologie de Bailleul, Monts de Flandre, who gave us the photo..

Not far from Nieppe lies Bailleul. In this small Flemish town of 14,500 inhabitants, close to Belgium, is one of the most remarkable water towers of the whole region, built just after the First World War. Next to it is a second water tower, built in the 1960s to meet the needs of the growing town, with a water-supply network of 154 kms. Water used to be drawn from springs on neighbouring Mont Noir. Nowadays, the original water tower has two 150 cubic metre reservoir tanks; the more recent and taller second one has a capacity of 1,000 cubic metres. The water tanks are cleaned once a year. Once again, the journalist was put off by the dizzy heights necessary to reach the top, so while the photographer made his ascension into the airs, the former did a quick reccy at ground level. Here, both ground floors have been taken over by the local fire brigade: one is used as a garage and the other as a gym.

Even though water-towers provide customers with a reliable, regular water supply and can serve as emergency reservoirs in case of electrical failure affecting the pumping system, water authorities continue to look for ways of improving the water supply network, adds the director of the Noréade Centre. « We are always looking for other possible water supplies. In a wet year, there’s no problem, but when there’s a dry one, there can be a shortfall [instead of a waterfall no doubt]. As in 1986, when part of Flanders didn’t have any water. » A rather annoying incident… from which Noréade learnt its lesson. Since then, networks have been doubled up, there has been constant drilling for new supply sources and all the networks have been linked up, notably via the « water highway ». « For the user, it all seems straightforward, but for us, it’s a real feat of technical engineering. »

Read our first article in English: Isn’t she beautiful, my water tower?

This article was translated by LCL Pollard and proof read by SafeTex.