The Florence Cassez affair: After her welcome home celebration…a cold shower for Flo?

It’s over! In a mad mediatised melee, Florence Cassez has left her Mexican prison and celebrated her return to France. Without wanting to be a party pooper, her return does raise one or two questions like… innocent or not? Why was she released? Have the politicians gone over the top? Has the Voix du Nord (a local pay-for newspaper) lost its head?

Florence Cassez has been released to a round of applause from her home region in the North of France (at least according to the Parisian media that imagines that we’ve nothing better to talk about in our little stone cottages. But the truth be told, my mum doesn’t know Florence Cassez from Adam). We don’t want to be party poopers but… Florence paid a high price, seven years in a Mexican prison, for having stupidly fallen in love with the good looking bloke who just happened to make his money kidnapping people. So, yes, we should have cried out with a single voice for Florence’s liberation. Now that that’s done, we hope that her liberation will dissipate one or two clouds that have been hanging over the case, presented as a young and naive girl’s struggle against the monstrous Mexican legal system by her media manipulating lawyer, Frank Berton. Clouds like what was the real relationship between Florence Cassez and her boyfriend Israel Vallarta? Was she really in the dark as to the supposed kidnapping activities of her Mexican Don Quixote? What role did her brother, Sébastien Cassez, play, as head of a company located in Mexico and associate of a certain Eduardo Margolis, businessman ‘como’ go-between for the kidnappers and the victims’ families? Why did Sébastien Cassez, now living in Cannes, rush back to France just before his sister’s arrest? Let’s hope that in the profusion of articles, books and talk-shows coming up, we’ll get some answers…

When will they give her a medal?

At the moment, the media coverage of Florence Cassez’ liberation leaves a lot to be desired. Ask most people and they will say good for her as she didn’t deserve to rot in prison for 60 years. But to make her out as a saint (harp playing in background) getting off the plane from Mexico is another matter. And it’s not only the media who are guilty of this: François Holland received her at the Elysée as if she was a returning war hostage while Michel Delebarre, member of parliament and mayor of Dunkerque, plans to confer upon her honorary freedom of his city. He’s even put up posters welcoming Florence Cassez home on the city’s advertising billboards! Unreal. At this rate, they’ll end up giving her a medal.

The 2,200 odd French citizens still under arrest in foreign climes aren’t normally entitled to the same VIP treatment: a few months ago, as 20 Minutes pointed out, a young woman returned to France without any brass bands to welcome her after having been held for 21 months in Mauritius. “Florence Cassez is pretty. But nobody gives a toss about some wally born in Saint-Etienne who converted to Islam!”, ironised a lawyer in the same newspaper. We cannot say he’s wrong. Florence Cassez became an icon during her captivity, imprisoned by a state rotten to the core. Since her release, we’ve been subject to intense lobbying for her to be officially recognised as innocent. For the “Free Florence pressure group”, this should be the logical outcome. As for the politicians, who’ve been known to go more by the book on other occasions , it’s more surprising as the young woman was released due to a violation of her basic rights to a fair trial: in other words on a technicality. The magistrates did not release her based on the evidence in the case and would never have done so. Mexico has simply got a politically hot potato off their hands. 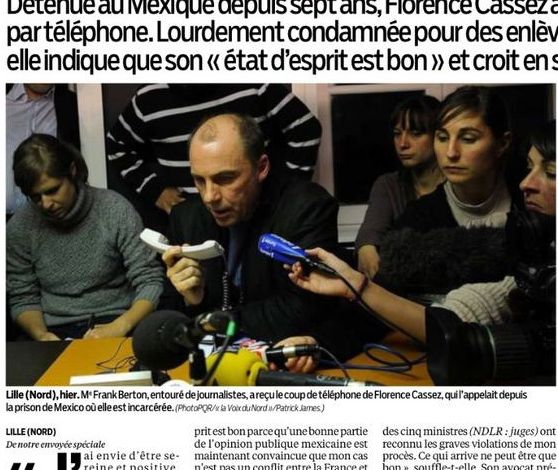 A photo of Frank Berton, according to the caption, in Aujourd'hui (a newspaper). Except that it's actually 'the lawyer' Eric Dussart.

Another, purely regional, element to be taken into consideration in the outcome of the Cassez case: the role played by the Voix du Nord. The newspaper has often been criticised for its lukewarm information and for sitting on the fence. Nothing could be further from the truth in the Cassez case. The newspaper has given over many a headline and used up a lot of ink to cover the subject these last few years, a standpoint defended yet again by its chief-editor, Jean-Michel Bretonnier, on Friday. “If the paper, as a whole, has followed this affair since the beginning and has not let go, if it’s gone beyond an unbiased coverage of events, if the case has made the headlines more often than in other newspapers and TV reports, it’s because the fate of the young local Frenchwoman was ignoble and unjust in a so-called democratic country”. One cannot but agree with him on this point. One can also congratulate Eric Dussart, a distinguished reporter, for his tenacity, he who believed in Florence Cassez’ innocence from the start. He turned it into a combat, a personal combat. But one can nevertheless ask if he stuck completely to his journalistic role in this affair… sometimes appearing more as her lawyer (the typo in the caption of Aujourd’hui is amusing: the person in the middle of the photo holding the phone is actually Eric Dussart and not Frank Berton). This was still the editorial line in one of his numerous articles last Friday in which he bluntly concludes: “What kept Florence Cassez going was… her innocence”.  Let’s hope for his sake that there are no unsavoury revelations to come… In the meantime, the journalist for the Voix du Nord has earned something else: Frank Berton’s gratitude in the form of leaked information for the next twenty years. That’s the least that he can do and something that the Parisian media can’t hope to expect!