Vote for the best ‘man-bites-dog’ article of the year

It’s time for our regular end-of-the-year column. Every December, since we launched our ‘petty crime’ map, DailyNord is pleased to offer you ‘la crème de la crème’. We have to name a winner but it’s you, the reader, who will vote for dipstick of the Year. 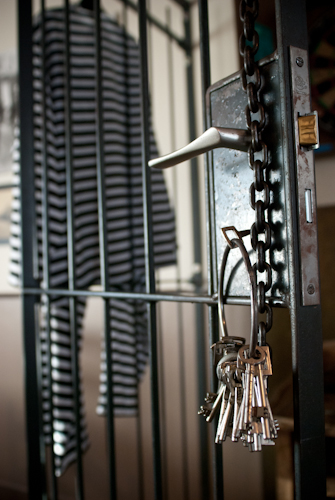 Some of our small-time villains have ended up doing time but they are more a danger to themselves than to the general public as you are about to discover... Photo: Stéphane Dubromel

He thought he was on to a good thing when he nicked a Renault Trafic. But his luck ran out when he was spotted by a police patrol. Hang on…the best is yet to come. The police officers began teasing a colleague and proud owner of a Renault Trafic. “Look, isn’t that’s your van going past” one chuckled to his colleague. Many a true word spoken in jest as the officer realised that it was indeed his van…. Our would-be criminal was quickly handcuffed and driven away in a… police-van

Some animals only pretend to be dangerous. Our man tried to end his life twice. On Friday, he barricaded himself in with two gas bottles and threatened to blow up everything, including himself. Who overpowered him? The fire-brigade. How? By overpowering him with water sprayed from the fire-hose.

Desperately seeking better rented accommodation? Maybe it’s better not to follow the example of a man from Boulogne. In September, he set his girlfriend’s flat alight. The police brought him in for questioning and their hunch was confirmed. The pyromaniac had decided to set fire to his girlfriend’s flat because she wanted to move. And without a roof over her head, she’d have gone straight to the top of the council’s rehousing list. Now there’s an idea.

BAILLEUL: THEY STEAL A PRINTER, COME BACK FOR THE PLUG AND…GET A WELCOME BACK PARTY!

A gang of novices decided to burgle the house of a hospital patient in Bailleul. They made off with the hi-fi, the computer, the TV etc. but woke up the neighbourhood in the process. By the time the police arrived, our happy-go-lucky gang were already far away. But they’d forgotten the plug and lead for the printer. Rather than buy a new one, they decided to go back to the scene of the crime…where they were welcomed with open arms by the police.

BAILLEUL: THEY STEAL A CAR, THEN CYCLE HOME…ALONG THE MOTORWAY

Bailleul seems to have more than its fair share of duff champions. These two found themselves with nothing to do on the Saturday evening of Lille’s famous Braderie. After meeting up with some other not so bright sparks on a joy-ride in a Ford Fiesta stolen from Villeneuve-d’Ascq, they took over the wheel to go for a spin along the narrow country roads around Bailleul. But this time the car ends up in a ditch. To put some distance between them and the incriminating car, our budding criminals steal two bikes from a nearby farm to peddle home. Along ‘police-free’ country lanes? Nope, they chose the quick option – the motorway. You can guess the rest….

TOURCOING: THE DEAD DOG IN A SUITCASE HAD… A MICROCHIP

Tourcoing is the setting for our next story where a dead dog was dumped on the pavement in a suitcase. Was the owner too scared to take the dog to the vet’s for fear of being reported for cruelty to animals? We’ll never know. What we do know was that he was no Einstein: the dog had a microchip that enabled identification of the dead dog… and the registered owner!

ARRAGEOIS: HE REFUSES TO PAY A TOLLGATE WHILE ON THE RUN

It’s difficult to understand how the minds of petty criminals work sometimes. Here’s a classic case. The police were out looking for him as he had taken off his electronic surveillance bracelet two days earlier. Yet he couldn’t find anything better to do with his new found freedom than to get on the motorway with a car stolen in Aisne… and then refuse to pay the motorway toll at Wancourt! More than enough to trigger the standard procedure. Spotted, identified, pursued and arrested.

BETWEEN CALAIS AND AMIENS: NO SHIT1: DELINQUANT CAUGHT IN THE LOO….

Hearing the young man’s cries, the ticket collectors on a Calais-Amiens train found him caught with his trousers down figuratively speaking – or to be more exact, with his arm stuck down a toilet. How had he got himself into such a pickle? The youngster, on day release from prison, had accidently dropped his cannabis supply into the toilet bowl…It took the fire-brigade three hours to free him before carting him off to hospital with part of the toilet still round his arm…

LAMBERSART: HE TOOK HIS REVENGE ON A COLLEAGUE…BY PUTTING DETERGENT IN THE CANTEEN PUREE!

We can joke about it now but it almost ended in tragedy. A few days ago, two canteen workers tasted the puree that smelt suspiciously like grapefruit, resulting in burnt throats for the workers and no mashed potato for the kids. It was soon discovered that the extra ingredient was not in fact grapefruit but detergent. Two of the canteen cooks were taken into custody. According to a police source in 20 Minutes,2 one of them owned up: he’d wanted to take his revenge on a work-mate. Not very subtle.

Some bored youngsters in the Drôme decided to have a bit of fun this summer by making a hoax call to the anti-poison centre saying that a woman had swallowed rat poison. Of course, they had to give an address. So they picked one in Lille out of the hat. An ambulance was dispatched to the reported address where the firemen broke a window to get into the house only to find themselves face to face with a startled Pierre Mauroy. The hoaxers were identified: they didn’t even know who the former Socialist Prime Minister was!

DUNKIRK: STEALS A CAR… WITH GRANDMA IN THE BACK

Our car-jacker couldn’t resist the attraction of an Alfa Romeo in Dunkirk. He tricks the driver out of the car with a ploy about an object in the road and drives off in the car. A few hundred metres down the road, he makes what you could call ‘an emergency stop’. In the rear view mirror, he’s just seen the owner’s 90-year old mother sitting in the back seat. Enough to make him run off? Nope, because our car-jacker is not one to be deterred… he drags the poor lady out and dumps her at the roadside but not before taking her handbag. The local newspaper doesn’t say if the police caught up with him but we certainly hope so.