A few weeks ago, he made a comeback: Manuel Gros, a lawyer specializing in public law, managed to obtain the suspension of subsidies from the Nord-Pas de Calais Regional Council to the Bollaert Stadium. We now hold our breath as we wait for the final decision, which could cause a tsunami in the financial world of stadiums. Manuel Gros knows a thing or two about stadiums: legal representative for ‘Save the Citadel’ that led to the stillbirth of Grimonprez-Jooris II, he has also defended the interests of Elisa in the construction of Lille’s Grande Stadium as well as the interests of Valenciennes Metropole with regard to the Hainaut Stadium. With such a pedigree, he deserves to have his portrait painted. 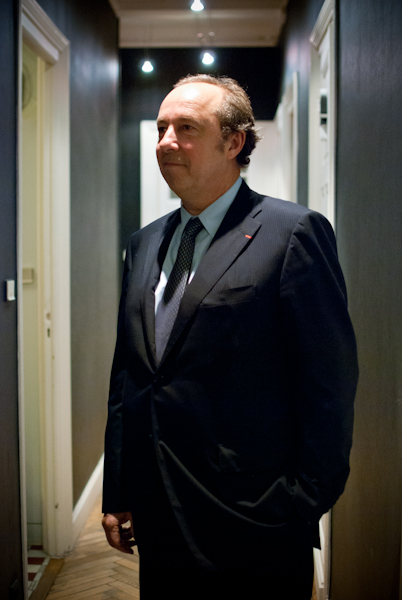 “It’s true that I have certain interests in local football clubs around here….” In his office, full of books and engravings, overlooking the rue de Béthune, Manuel Gros gives a wry smile. Although he doesn’t want to be typecast as ‘The Stadium Lawyer’, the conversation keeps coming back to football. It has to be said that the lawyer, in his fifties, has added his own unique touch to this new millennium. Early in the millennium, he defended the interests of the ‘Save the Citadel’ association in the Grimonprez-Jooris II affair. Sometime later, Elisa appointed him legal counsellor for the Grande Stadium proceedings and the Valenciennes Metropole did the same for the Hainaut Stadium, before he became the legal representative for the opposition party in the Nord-Pas de Calais Regional Council. It is this group that have just succeeded in suspending all deliberations concerning subsidies for the Bollaert Stadium. A real thoroughbred. What’s more, this latest affair could prove to be dynamite: “There has been a preliminary hearing and the judges have suspended deliberations [on the subsidies] awaiting a full hearing and decision. I only had to bring up the lack of debate to obtain the suspension (for more information, see our texto). But at the end of the day, the question is whether regional government and local councils in particular, should finance a club that does not belong to them?” If the judicial system accepts our position, the Bollaert jurisprudence will open a Pandora’s Box. And local councils, often called upon as soon as a stadium project is short of money, will no longer have a free rein….

Got involved in stadiums by chance

Is this a new centre stage performance for the stadium lawyer? Only the future can tell (the proceedings may take up to a year). In any case, it’s another occasion for Manuel Gros to find himself in the limelight. A bit by chance, if the truth be told. Because, although his doctoral thesis in 1982 was on sport and politics, no one could have predicted that he would become a specialist in sports arenas. “For Grimonprez-Jooris II, the associations chose me for my expertise in administrative law. To be honest, even though I thought I could win it legally, politically, I expected to lose.” Translation: when he took on the case, he knew that the political pressure would be great. “People get very hot under the collar about football. At the time of Grimonprez-Jooris II, someone published my address on Internet and offered 700 Euros to ‘smash the place up’. The district attorney had to step in.” The legal victory opened other doors, however: Elisa contacted him about the Grande Stadium. The message was clear: “After your success in the Grimonprez-Jooris II affair, everyone wants you to be on their side rather than on the other side. I accepted, partly out of egoism. I think that what I really wanted was to show the supporters, who’d been up in arms against me for the previous affair, that I could also defend them.” And today, he says jokingly that he has two cases to his name where he pleaded for stadiums (the Grande Stadium and the Hainaut Stadium) and two cases against (Bollaert and Grimonprez-Jooris II).

Is Esquire Gros an expert at doing the splits? He defends himself: “I’m a lawyer: if the case is defendable, I defend it. That doesn’t mean that I agree with it.” Nevertheless, as you listen carefully to what he says, you understand that he was a partisan for the Grimonprez-Jooris II cause (“a great victory for justice and democracy“) as well as the choice for the final location of the Grande Stadium. “It’s much easier when you agree with the position you are defending.”

A specialist in administrative law, not stadium law

Let there be no doubt: the vast majority of cases defended by the 56-year old lawyer are not about stadiums. Manuel Gros has left his mark on a diverse number of cases. Cases concerning medical liability, town and country planning (he is the lawyer for an association that defends the local residents in the vicinity of the Croix-Beaumont park) or even transmitter towers, for which he has built himself up quite a reputation with a dozen or so cases under his belt. He is also a professor at Lille II University, former Dean of Douai Law Faculty, and a heavyweight in mining rights. “The stakes were high, although there was little media coverage. When mining stopped in the Nord-Pas-de-Calais, I had the shutdown agreement with Aniches annulled. Owing to this decision, the condition in which the mining company had to return the land was completely changed. However, the public at large don’t know this, even though it has an impact on the everyday lives of the people in and around the former mining area. On their roads, on their forests, on their water, etc.”

Does it bother him that there’s little recognition in administrative law, while the TV cameras are always turned towards the heavyweights of criminal law, such as Eric Dupond-Moretti? “No, we don’t do the same job. In your own small circles, people know who you are, of course. It’s true that my family and friends sometimes ask me why I’m not in the papers. To be frank, I’m not interested in that.” Nor money, says he who earns a very good living and admits that things really took off after Grimonprez-Jooris II. “There’s no doubt that people come to see me because of that as well as for less publicized successes.” And on the side he admits that he can also lose just like anyone else.

At 56, Manuel Gros appears to be a happy lawyer. A vocation that the father-of-three, soon-to-be grandfather had not dreamt of during his childhood: “I love literature, just like my old man – a teacher- who became a literary critic. I wanted to follow in his footsteps.” But his father advised otherwise. “He said that you can’t earn enough to live on in the literature business. So, I looked around for something else to do. I studied law at University and took the oath in 1990.” And ever since, he has lectured, in conjunction with his law career that lets him enter the different worlds behind each case, just like in a book: “The two careers go well together.” Teaching gives me the theoretical dimension that serves me well as a lawyer, who, in turn, pops up in the lessons.” One of these days, you might even find the two characters in a book that Manuel Gros hopes to write. A return to his roots. We’ll have to wait and see if the story is set against a backdrop of collieries.