France or Belgium: Which country is cheapest three and a half years on ?

Each time cigarette prices go up, it’s the same old story. Viewings shoot up of our article published in 2009, France or Belgium: which country is cheapest?  Three and a half years on, we wanted to know if the differences in prices had increased or decreased. Or even if the price advantages had upped and moved from one country to the other. First reconnaissance… 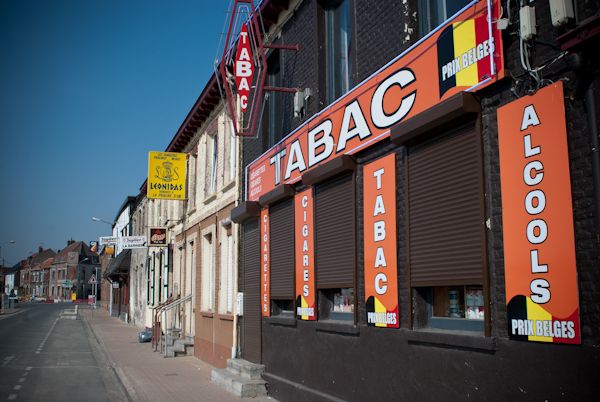 A PACKET OF CIGARETTES: Belgium is better, and by a long shot!

A BOOK: Read all about it in France

Fifty Shades of Grey by E.L. James is the best-seller of the moment. Comparing prices in two Carrefour stores on either side of the border: in Belgium, it costs 18.80 Euros, while in France, it costs just 17 Euros. In 2009, at the time of our last comparison, the selected book was 2.20 Euros cheaper in France. So things haven’t changed much, even if this isn’t true for all books. The Casual Vacancy, J.K. Rowling’s latest book, costs 24 Euros in both countries.

A CD: France is the maestro

In three and a half years, CD’s have taken a battering and their shelf space has shrunk dramatically in the supermarkets. When we passed through on the Belgian side, we had to fork out 16.90 Euros for Cabrel or Raphaël. In France, the same two CD’s are just 16 Euros and not a centime more (comparison between two Carrefour stores). That’s a difference of 0.90 centimes in France’s favour, as in 2009 when the price difference for La République des Météors by Indochine was even greater (1.60 Euros)

A SIX-PACK OF LEFFE: Belgium in the lead by a short (beer) head!

Thinking of stocking up on Leffe to get you through the winter… you probably reckon you’re better off in Belgium. A six-pack of Leffe lager, 33 cl, grabbed on both sides of the border, turned out to be cheaper in Belgium than in France three years ago (4.86 Euros against 5.30 Euros). We wanted to test this again, but we couldn’t find identical bottles (33 cl in Belgium, 25 cl in France). In France, the price is 2.55 Euros per litre. In Belgium, a litre costs a measly 0.01 centime less, but the Belgians did throw in a free glass. So Belgium is still best… but less so than in 2009: at that time, the price of a litre of Leffe was 2.45 in Belgium and 2.67 in France, where the price of beer has since dropped… But don’t get too excited: higher taxes on beer are in the French pipeline…

CLOTHES: it makes no odds

No big surprises when it comes to clothes: we checked out Esprit on the Web and our caddy came to 69.95 Euros whether we ordered on the Belgian or the French site. At H&M, a selected jacket also costs the same price (29.95 Euros). With clothes, it’s difficult to tell if prices have gone up.

A CAR: Belgium in starting position but it depends on the make.

Let’s move into top gear. Fancy a new car? Here, the best catalogue prices have crossed the border: while the Ford Fiesta cost 100 Euros more in Belgium three and a half years ago, this time round, an Audi Ambiente is cheaper at 12,700 Euros. In France, you would have to fork out at least 13,150 Euros. That’s a difference of 450 Euros for the basic model (as per manufacturers’ prices on Internet) in Belgium’s favour. With Volvo, it is also better to buy Belgian, the same as three years ago: the V60 in France starts at 29,200 Euros, while in Belgium it’s now 28,950 Euros (that’s 350 Euros less, although in 2009, the difference was 1,300 Euros).

A FILM AT THE CINEMA: Belgium gets the Oscar but price increases all round.

If you go and see the latest box-office success, is it cheaper at Kinépolis Lomme or Kortrijk ? Back in 2009, a cinema ticket was 9 Euros (full price) and 7 Euros (reduced price) in France. Inflation has taken its toll: Today, the same ticket costs 10.35 Euros and 8 Euros. In Kortrijk, 2009, the respective prices were 8.50 Euros (full price) and 7.5 Euros in Belgium. Here too, the increase is noticeable (and comparable), even if Kortrijk still comes out cheaper: 9.6 and 8.6 Euros.

“FILL HER UP” is better said in France!

Turnaround for petrol prices? Although Total in Chapelle d’Armentières is more expensive than Q8 in Bizet(1.49 against 1.45 Euros), when we compare these prices with a supermarket station (Carrefour at Armentières), the price at the pump is 1.359 Euros (at the end of October). So if you shop around, you can find cheaper petrol in France than in Belgium, whereas a few years ago, even if the price difference was not enormous, our French friends flocked to Belgian.

A BIG MAC AT MCDONALD’S: The tide has turned

In 2009, a Big Mac was a good means of comparing prices between various countries. The same holds true in 2012. And here too, the tide has turned with the Big Mac sky-rocketing in France to 4 Euros (compared to 3.50 Euros three years ago). In 2009, the Belgian burger was more expensive (3.65 Euros) whereas in 2012, the Belgian Big Mac offers a better deal (3.85 Euros) thanks to a smaller price increase.

LÉONIDAS CHOCOLATES: Belgium has the sweetest prices … but with a bitter tinge

For our gourmand readers, we popped into Léonidas, the famous chocolate maker. We gave you a no-nonsense price per kilo in 2009 which you all appreciated: 18.80 Euros with our Belgian friends compared to 24 Euros in France. A noticeable increase in 2012: a kilo is now at 23.4 Euros at the Wattrelos-Herseaux border, while in France, you’ll find it at 27.8 Euros… A similar price increase that can leave a bitter taste in your mouth on either side of the border…

In conclusion: a couple of surprises

Conclusions: If we look at specific products, the comparison is interesting: tobacco prices have risen dramatically in France while Belgium has resisted this trend (we can’t say the same for chocolate)! Beer is the big surprise as it has come down in France to nearly the same level as Belgium (for the moment…). When it comes to McDonald’s and petrol, the boot is now on the other foot

We knowingly compared products in similar stores which are within 20 kilometres of the border. That’s why we used supermarkets (Carrefour) and chain-stores (Léonidas, McDonald’s, Total, etc). Some prices, such as for new cars, are based on manufacturers’ online information, without taking into account government incentives and other discounts that could be negotiated with the dealer. All the prices were compared within a period of two days.

1 A small border town just to the east of Roubaix

3 Kinépolis is a cinema group with cinemas in France and Belgium. Lomme is small town in France and Kortrijk (Courtrai in French) is a town in Belgium

4 Total and Q8 are petrol stations. Chapelle d’Armentières is in France and Bizet is just over the border

5 Carrefour is a famous chain of hypermarkets that often sell petrol . Armentières is a famous French town

6 Another border town, this time near Tourcoing, France, but just inside Belgium